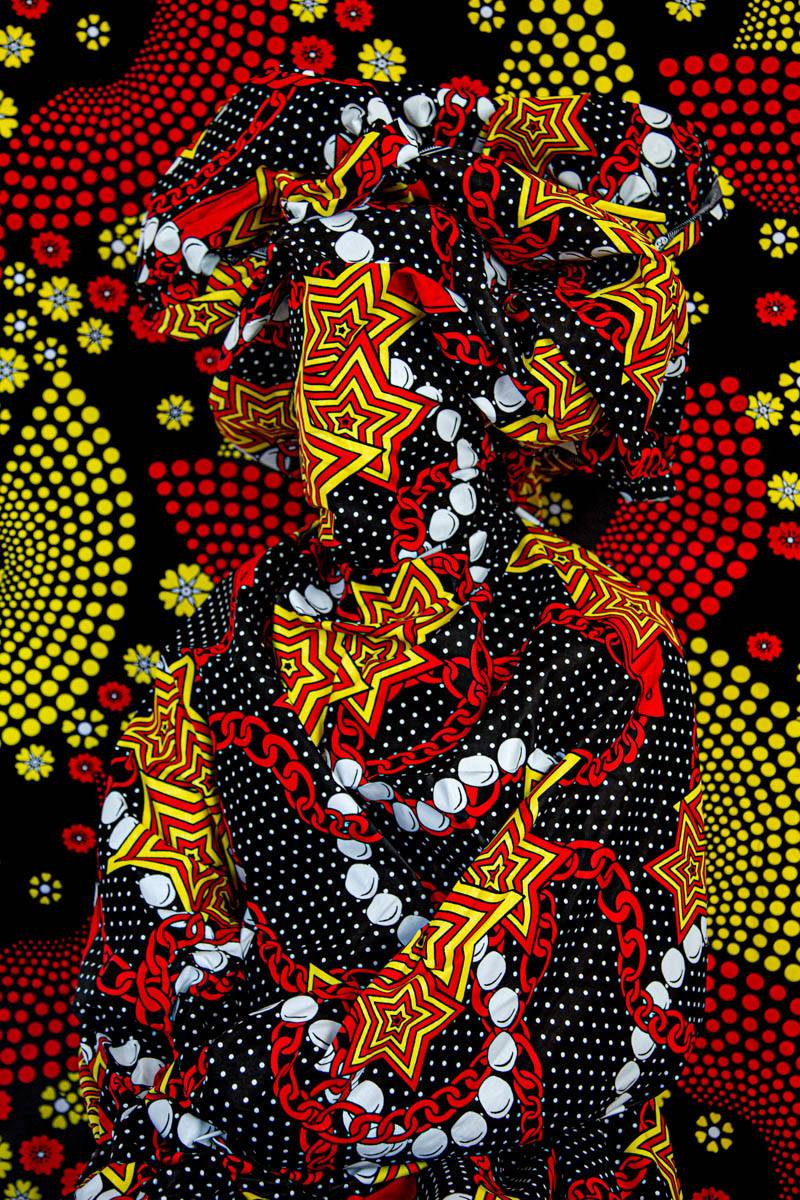 Textile unites and divides us, both physically and symbolically. While its functional purposes are evident, its indexical capacities are not. Textile constitutes a nexus in which politics, economics, and histories collide. In her series FLUX, artist Alia Ali draws the viewer's attention to the textile as a document in which politics, economics and histories collide. Focusing specifically on wax print, Ali asks, how did these textiles obtain their names? Wax print—a wax-resistant dyeing technique—exists under various monikers, including African wax print, Dutch wax prints, Ankara and batik. These names reveal that colonial histories and economic reactions are woven into the processes and patterns that define the print. A vibrant aesthetic obscures an iniquitous past and embodies a dynamic narrative which accentuates the complex conditions by which these textiles have come into existence.

FLUX is a series of shifting photographic artworks that embody silhouettes that are warped by textile, saturated in colors and a medley of motifs. Each frame is uniquely upholstered with wax print sourced from Cote d’Ivoire. While some of the images distort visibility, others create hypervisibility almost negating themselves into animated forms of camouflage. The multiple dimensionality creates a kaleidoscope of perspectives, horizontally and vertically. Horizontally, in that this material has come into existence across borders over land and water, and vertically in that they draw from and evoke cosmic, mythical and religious inspirations. Furthermore, these particular wax prints are a key to mapping the colonial trade routes. While they certainly can be seen as escapist dreamscapes, they are also objects of oppression and capitalism.

FLUX questions the very nature of how things get named, how they are reinterpreted. Furthermore, it questions the intention of their production. If it is not for the preservation of heritage, then is it for the propagation of wealth and whose wealth?

Author: Alia Ali is a Yemeni-Bosnian-US multi-media artist. Having traveled to sixty-seven countries, lived in seven and grown up among five languages, her most comfortable mode of communication is through image and multi-sensory mediums. Her extensive travels have led her to process the world through interactive experiences and the belief that the interpretation of verbal and written language has dis-served particular communities and presents more of a threat than a means of understanding.

Alia's aesthetic interests stem from people, place, and the processes which unite and divide us, all at once. Her work reflects on the politics and poetics of contested notions surrounding the topics of identity, physical borders, universality, mental/physical spaces of confinement, and the inherent dualism that exists in everything. Her work blurs the lines between what we claim to be objective and subjective, illusion and reality, truth and interpretation.

Alia’s work has been featured in publications including the Financial Times, Le Monde, Elle, Vogue, Hyperallergic, and Harper's Bazaar Arabia. She has won numerous awards including the LensCulture Emerging Artists Award, the Allan Sekula Social Documentary Grant, the Magenta Foundation's Emerging Talent Award, and Gold in the Fine Art Category of the Tokyo International Foto Awards. She has exhibited internationally and has most recently exhibited in museums, fairs and festivals including PhotoLondon 2019 in the UK, 1:54 Contemporary African Art Fair in Morocco, Karlsruhe in Germany, the Lianzhou Photo Festival in China, the Stedelijk Museum Schiedam in the Netherlands, the Katzen Museum of Art in Washington DC, The Contemporary Art Center in New Orleans, and the Kuala Lumpur Photo Festival in Malaysia. Alia has presented lectures and workshops at Harvard University, the LACMA, the Middle East Institute, Gulf Photo Plus and the Arab American Museum.

Alia Ali lives and works in Los Angeles and Marrakech.