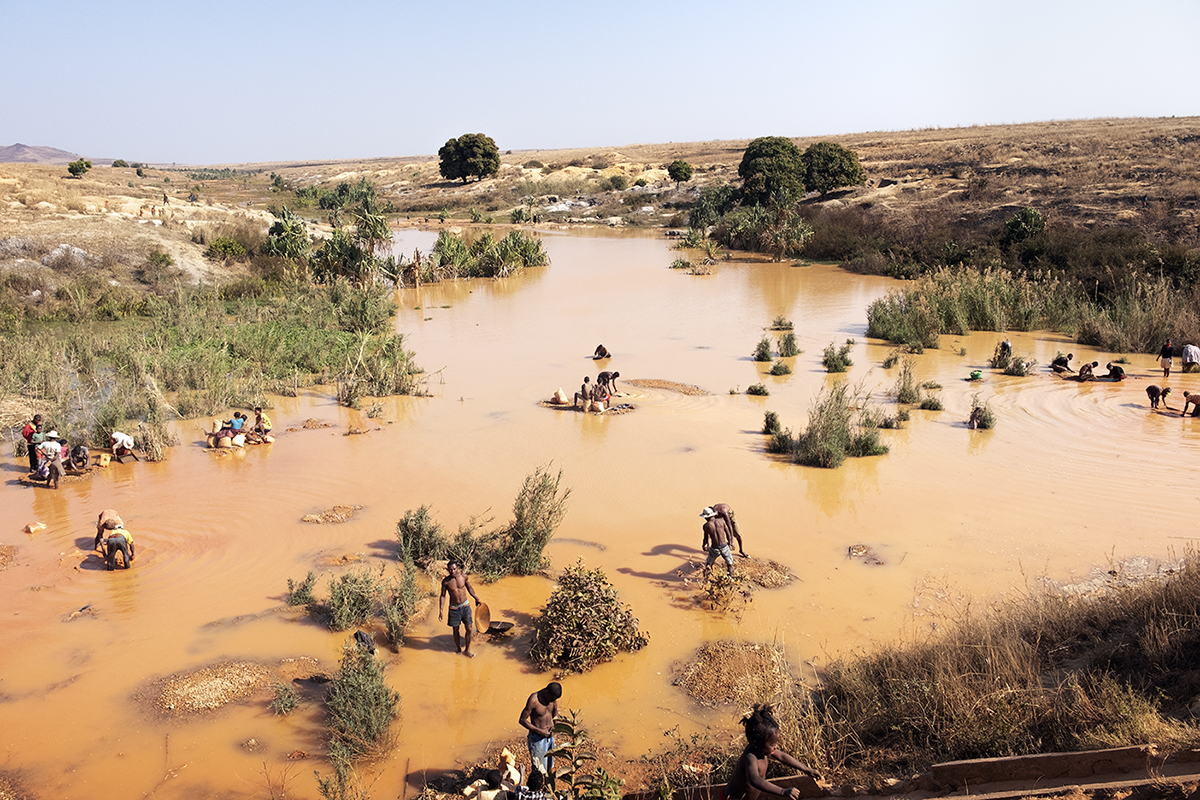 Ilakaka is a small town in the southern desert plains of Madagascar, along the Route Nationale 7, the main road linking Antananarivo to Toliara. It is best known to be the largest sapphire mining area on Earth, supplying nearly 50% of all these gemstones in the world. Counting barely 40 residents in the late ‘90s, its population has jumped dramatically to 60.000 in less than ten years, due to the discovery of a vein with very high-quality sapphires, the second hardest and most valuable stones in the world after diamonds. Labourers have therefore migrated in from all over Madagascar and traders from around the globe.
Anyway, in this precious and fragile ecological treasure poverty and luxury controversially coexist. Despite the economic boom it has remained a poor shanty town where Malagasy workers are exploited by foreign traders, mainly form Sri Lanka and Thailand. Much of the profit occurs overseas. Most of the sapphires mined there leave Madagascar as raw and uncut material and end up in Sri Lanka or Thailand for polishing and sale.
Everyday from the crack of dawn until late afternoon - for just 5.000 Ariary a day (less than 2 euros) - Malagasy miners, by hand or simply using a sharpened piece of steel rod, dig deep holes with a diameter of almost one meter and reaching down to 25 meters. Men or children - even eight-year-old boys, because smaller and lighter - are lowered down the wells by make-shift log and rope winches, to find and carry on gravel and sand to be sifted. Once the sapphire rich gravel is found, the workers dig tunnels. Death by asphyxiation happens very often, as the holes and the tunnels lack of any reinforcement and are likely to collapse.
The town’s main sapphire mine is called the “Swiss Bank”, an unstable 50 meters deep hole whose excavation works are financed by a swiss entrepreneur, owner of one of the bigger and plushier purchasing posts in the main road of the town. Real human chains everyday relentlessly dig under the watchful eye of the mine’s foreman. Since murder and robbery are fairy common, two or three persons also monitor day and night to make sure nobody break in.
Out of the traders’ businesses there are large number of illegal miners operating in Ilakaka who smuggle large amounts of gems out of the country.
After excavation the stones are washed out with sivanas (sieves with wooden frames, rarely turtle shells) in the river to find the gems. Afterwards miners descend on the town to sell their day’s treasure to a patron. Ilakaka’s main road is a delirium of crumbling wooden stalls, bars, shacks or luxurious palaces - owned by the richest traders - where the stones are bought and sold. Expert traders sit behind their counters, only armed with a torch and a water bowl, competing with each other for the purchase.
Anyway the situation in Ilakaka is not only dangerous and tragic for people. As a result of deforestation and uncontrolled mining its arid soil has become an ever-expanding catastrophic landscape of holes that can be used for almost nothing else.

Author: Daniele Stefanizzi, photographer, was born and currently lives in Bologna, Italy. His passion for photography dates back to his university years and he cultivated it during his travels across the world. In 2013 he attended a course at the Shoot Institute in Bologna and then kept participating in several workshops throughout Italy and abroad. He is mainly interested in social and reportage photography and his works have been published by many magazines and awarded in national and international contests.