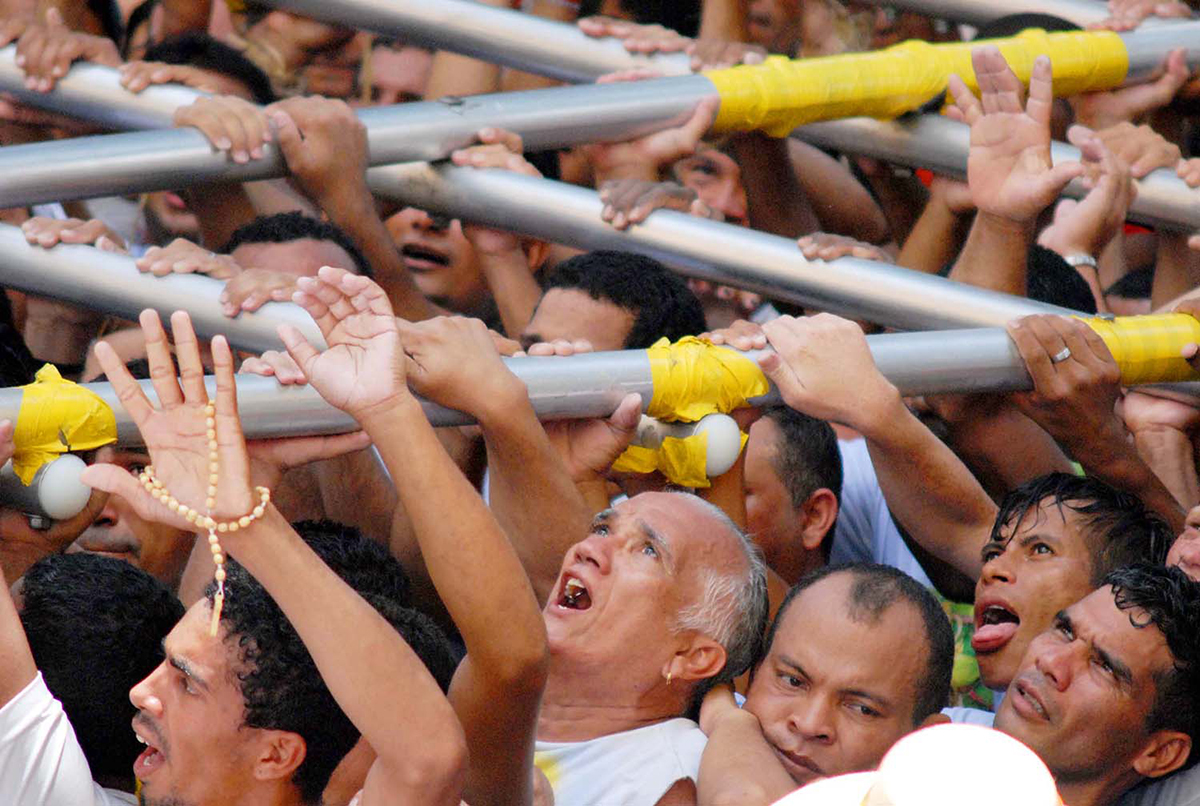 Penance & Privilege photographic series is part of the project Things I Don't Quite Understand (But I Eventually Will). It is composed of 88 coloured and B&W images; produced on the streets of Brazil, using 35mm negatives.

The essay, as a form of personal artistic expression depicts many layers of ignorance contained in a traditional pilgrimage as believers follow their deity idol. It can also be interpreted as a larger portrait of present reality that submerges the country.

Main focus remains on devotees eyes through which we can guess their social hierarchy and question personal motivations of those who take part in this major religious manifestation. Eyes that look back to me saturated with faith as questioning the privilege of my own lack of credulity in such form of forgiveness.

I was brought up among the fundamentals of the catholic church. There was plenty of fear, guilt, punishment and morals. We will be judged for our sins (not just mistakes) by a flawless God.

There will be suffering, regrets and self inflicted pain all along the twelve hours of pilgrimage as there is in real life if truly devoted to religion.

Even a pray of gratitude is immersed in blame as if every personal achievement wasn’t earned but bestowed on oneself as a grace.

Merely as an observer, an outsider in this particular manifestation of belief and being utterly attracted to the given images, I tend to remember what I was once taught about heaven and hell. And I seem to experience the materialisation of a conceptual definition that hitherto seemed vague.

And I question myself what does it feel like to be so close to divine power?

Author: Visual Artist Rio de Janeiro-based Patricia Borges (1974) abandoned Architecture to follow her true calling. In 2002 she moved to Sydney to study at the Australian Centre for Photography. In 2013 she was awarded with Lorenzo Il Magnifico first prize in photography at Florence Biennale. In 2014 her photographic work displayed at the Biennale D'Arte di Roma also won the First Prize. In 2016 she got a Cinematographer degree from AIC - International Academy of Cinema / RJ. Followed by a Screenplay degree in 2017. In 2018 her work was part of Le Salon des Artistes Français at the Grand Palais in Paris, were displayed at Tokyo Art Fair in Japan and Clio Art Fair in NYC. In 2019 she was shortlisted at Arte Laguna Prize in Venice, took part of Life Framer Photography Prize Exhibition in London and Milano, exhibited her works at Luxembourg Art Fair and Photo Israel.