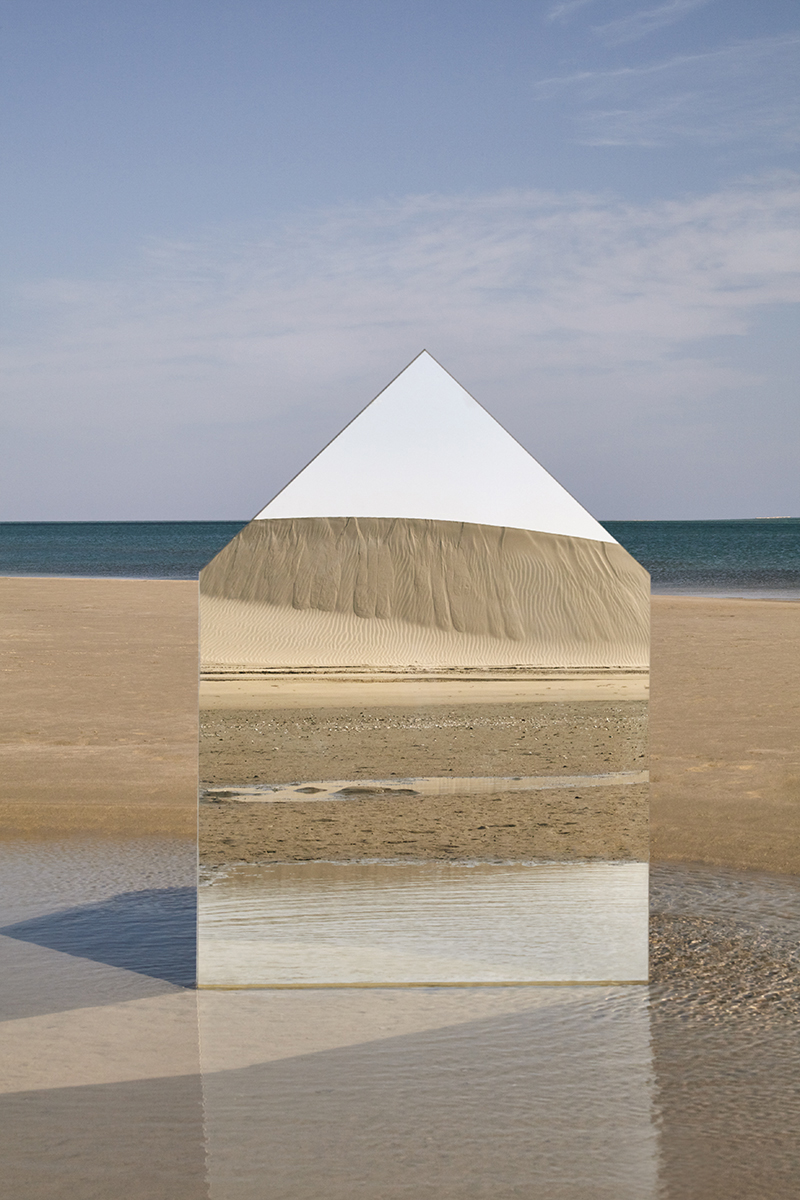 MYSTERIES OF THE HORIZON STATEMENT

Mysteries of the Horizon are a series of photographic images shot in the shifting sand dunes of Qatar and the remote Inland Sea. The images focus on a reflective mirrored object in the form of a house. The object appears like a mirage on the horizon, reflecting the elements around it yet prominently standing out through its recognisable house shape outline.

As the object blends in and out of its surroundings, it creates a distorted reality playing with the idea of past, present, and future whilst echoing a sense of home and putting into question what is over the horizon? The juxtaposition of the natural and man-made creates a dream-like aesthetic taking stylistic cues from surrealism. The symbol of home becoming a part of its environment, echoes the feeling of being in a new place for a brief time and thoughts of home, whilst looking to the unknown of what the future holds, this, in turn, became a way for the artist to immortalise the memories of her time spent in the Middle East.


Mysteries of the Horizon was commissioned by the British Council and curated by David Drake, Director of Ffotogallery, the national photography agency for Wales, for The Place I Call Home exhibition.

The Place I Call Home is a cross-cultural exhibition, presenting the works of 13 artists, each using contemporary photography to explore the idea of ‘home’ related to the experiences of young people living in the Gulf and the UK at a time of rapid change and social mobility. The project comprises a photography exhibition and public outreach program that will travel to six Gulf states and start in the UK this autumn.

Author: Abi Green is a still life photographer and director based between London, UK, and Doha, Qatar, specialising in the area of still life photography and moving image. Born and raised in London where she was educated at Fine Arts College, Chelsea College of Arts and went on to graduate with a BA (Hons) in Photography from Middlesex University London.

Abi’s work has been featured on Vogue and Vogue Italia online, Le Book and It’s Nice That. Nominated to exhibit at the D&AD, New Blood Awards, London, in 2009 and Mother London’s, Open Book in 2015, she has also been published both in the UK and the Middle East, including magazines such as Notion, Crack, Elle and Twenty-six.

Driven by interests in colour, light art, and sculptural objects, she is often influenced by surrealism, modern and industrial design, which enhances her contemporary visual style. Her projects carefully balance a minimalist approach with a graphic, colourful aesthetic resulting in a distinctive eye-popping quality.

A key part of her image-making is the humorous twist that underpins her creative concepts, with this unique approach she hopes to leave her audience with a taste of her playful nature.