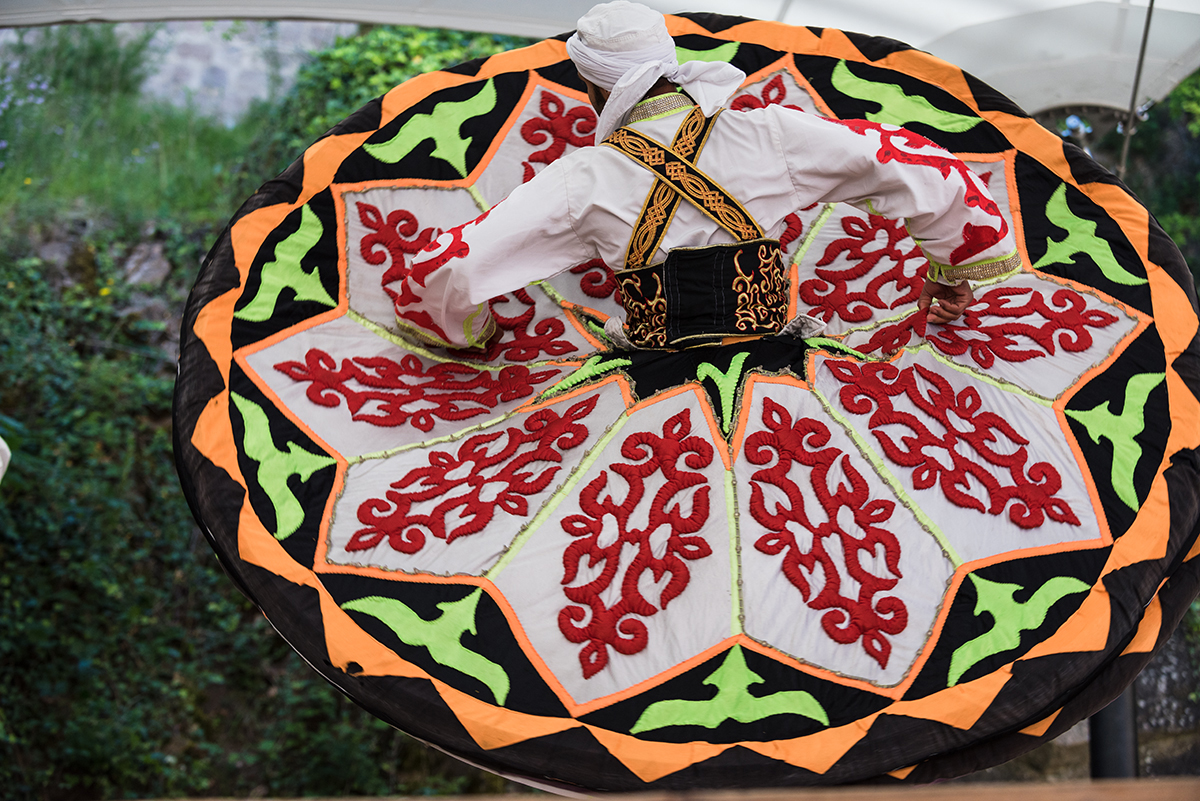 The meaning of Tanoura dance is explained by relation between zar and zikr. The Egyptian dervish dancer Ibrahim Hassan performed in France in one of mediaval castle which is named Hohlandsbourg Castle. In this scene captured from in whirling part of his 30 minutes long performance. This particular sufi dance and whirling does it for at least 15 minutes than the dancer starts act some ritual parts. As told, it is a story that connects men to the divine; a dance that refers to the relationship of land and the sky, man and God.The performers’ round skirts and swirling actually refer to the circle of life or the universe.
The weighted skirt was heavy; it affected my balance and placement. Ibrahim Hassan was spinning rapidly and the colored patterns of the tanoura created a kaleidoscopic effect. The philosophical basis for the spinning is from the idea that says the movement in the world begins at a certain point and ends at the same point, there fore the movement has to be circular.
When he moved he was like the sun. He untied and removed four different skirts during the finale.Their various roundabouts symbolize the succession of the four seasons and their anti-clockwise movement is exactly like the movement around the “Kaaba” (the holy Shrine in Mecca).
During his performance, I realized he lost his connection between audience and he explained about his feelings that he enters a trance-like state, trying to become light and go up to heaven.
That is the moment I captured with 78.0 mm focal length and 1250 sec exposure with f/4.0 in 400 ISO.

Author: Bio:
Gülsen Göksel is an artist and educator based in Izmir, Turkey; now living in Raleigh, USA. Goksel holds a Bachelor of Arts in Turkey from DEU. (1988)
Gülsen’s career began during her university years, opening collaborative photography exhibitions and receiving prizes for her fine art prints. During working as a graphic designer and art director in various advertising agencies, she also was a lecturer in the fine arts faculty. Over fifteen years of experience in commercial and education areas, she changed paths to pursue her art practice and share her passion for the medium of photography through her narrative projects. She has recently received her certificate in photography from the critically reclaimed International Center of Photography, NY. (2020)
Her personal works have been exhibited in Turkey, Switzerland, New York, Italy, and Spain.