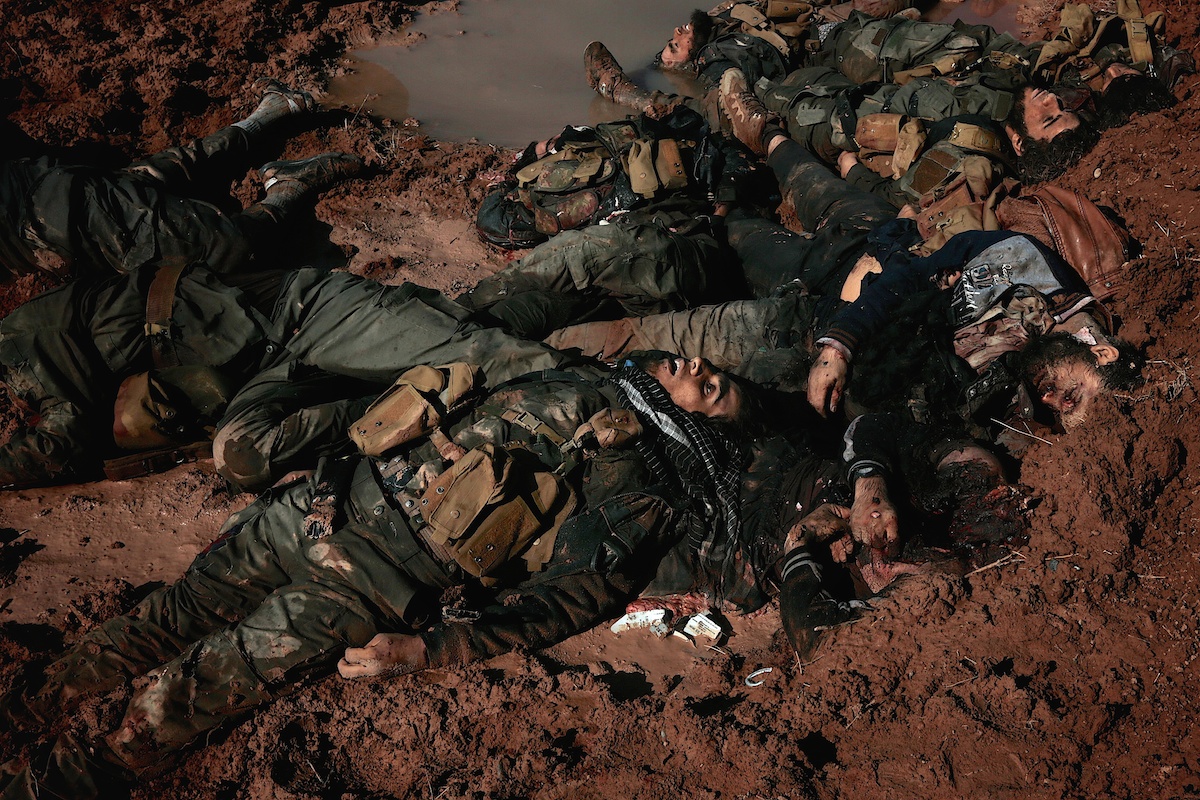 Heaps of dead Islamic State fighters killed after heavy night clashes with Kurdish forces on the outskirts of Kirkuk, Iraq found on January 31, 2015. The radical Islamist fighters attempted to take Kurdish Peshmerga positions under the cover of night and heavy rains to avoid Coalition airstrikes on the previous night. The attempt made by ISIS according to the Peshmerga was to force the Peshmerga to withdraw deeper into the city of Kirkuk. These attacks made daily by Islamic state militants are to deter the Peshmerga's ongoing offensive supported by Coalition airstrikes to push them out of the small outskirt town of Mulla Abdullah and surrounding areas. These bodies were searched thoroughly for ammunition, identification, and any other intelligence, by Kurdish forces. The commanding Peshmerga officer claimed that they found many European IDs among the dead Islamic State militants. Some of the Bodies were decapitated (right) and Kurdish commanders later publicly announced their outrage at Kurdish fighters that had tied the heads to the back of trucks and drove them throughout the city of Kirkuk. The Bodies of roughly 40 Islamic State militants mostly unknown were later bulldozed where they fell into unmarked graves.

Author: Osie Greenway started his freelance career in 2012 covering the Syrian refugee crisis spilling over the Jordanian border and the economic unrest in the country that was expressed in riots and protests. From Jordan he moved to Beirut, Lebanon and continued covering the plight of the Syrian refugees and sectarian clashes linked to the Syrian conflict in 2013-2014. Late 2014 he arrived in northern Iraq to cover the war erupting as the group known as ISIL stormed military bases and captured the city of Mosul from the Iraqi Army. There he stayed until the summer of 2015 documenting the war between the Kurdish Peshmerga and the Islamic State group. He was previously based in Iraq covering the offensive to retake the city of Mosul. His work has been displayed in exhibtiions in London, Paris, New York City, Brussels, Moscow, Berlin.