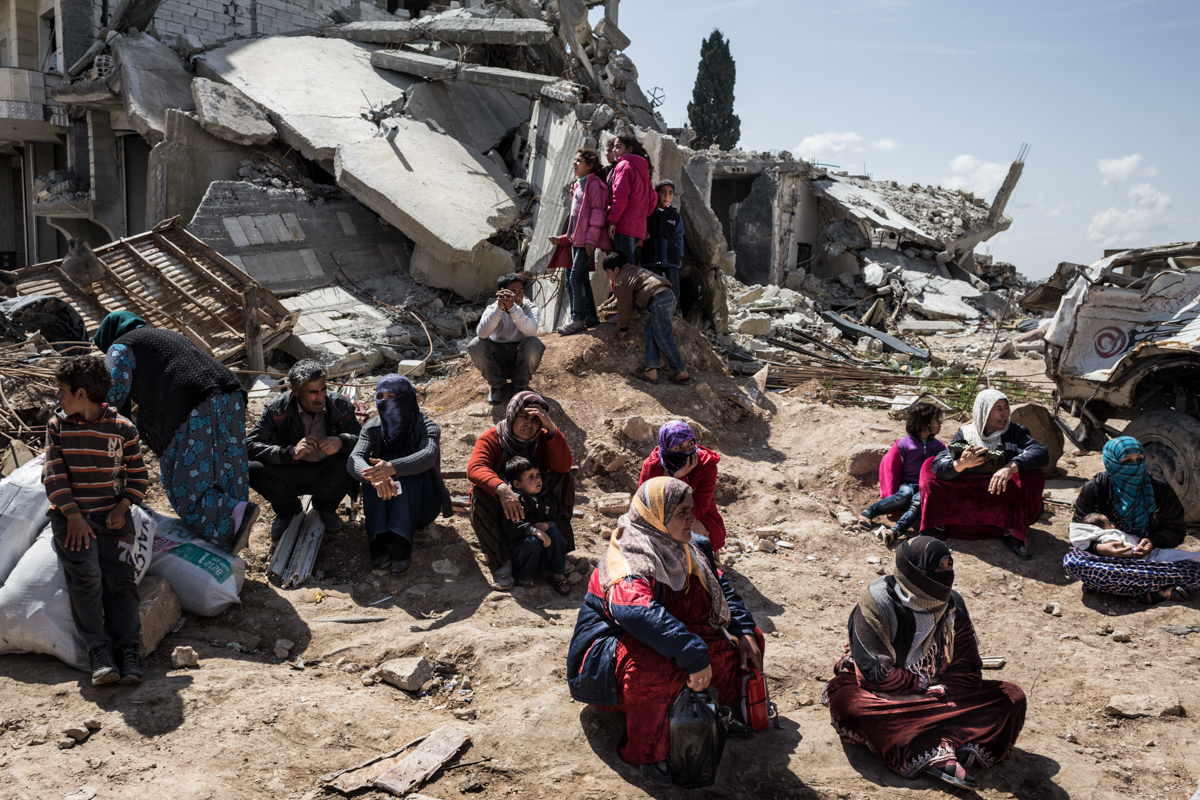 When in 2014 I heard about the Islamic State’s siege on Shingal city in Iraq and later on the Kurdish city of Kobane, in northern Syria, between summer and autumn of 2014, I got really scared about Kurds’ fate in these areas. In October 2014, I therefore flown to Turkey starting to follow the situation on the border with Syria. In that days, I began to live, in some tents with some Yazidis escaped in August from Iraq and people fled from Kobane. Shortly after the liberation of Kobane, I took the decision to enter in the destroyed city. That’s where came the idea of developing a long-term visual project about the difficult life of Kurds and their brother in language, the Yazidis. This image represents a sort of synthesis of the tragedy of these people.
It was shooted at the entrance of Kobane city, on the gate border with Turkey. people represented in the image are refugees from the city of Kobane, who after months of forced exile in Turkey are just returned back in the city, shortly after the liberation from ISIS militiamen, on february 2015.

Author: Giacomo Sini born in Pisa, (Italy) in 1989. In 2014 he obtained a degree in social sciences at Pisa University. Traveler, has passed through fifty countries photographing the social and political realities. Passionate about the Middle East and Central Asia, has photographed many times the reality of conflicts in Middle East, focusing primarily on the struggles of the minorities He has lived in Istanbul for some months in 2015. Giacomo participated at the master in Contemporary photojournalism 2014-2015 at "Officine Fotografiche Roma" in Rome, where he was chosen to expose his reportage of Kobane and Kurdish refugees at the national exhibition of "Fotoleggendo 2015.
Today is living in Livorno, (Italy) but he sometimes moves to Middle East.
His works has been published in Vice Magazine, L'Express, El Pais, Il Manifesto, Die Zeit, Kansan UUtiset, Neon Stern Magazine.