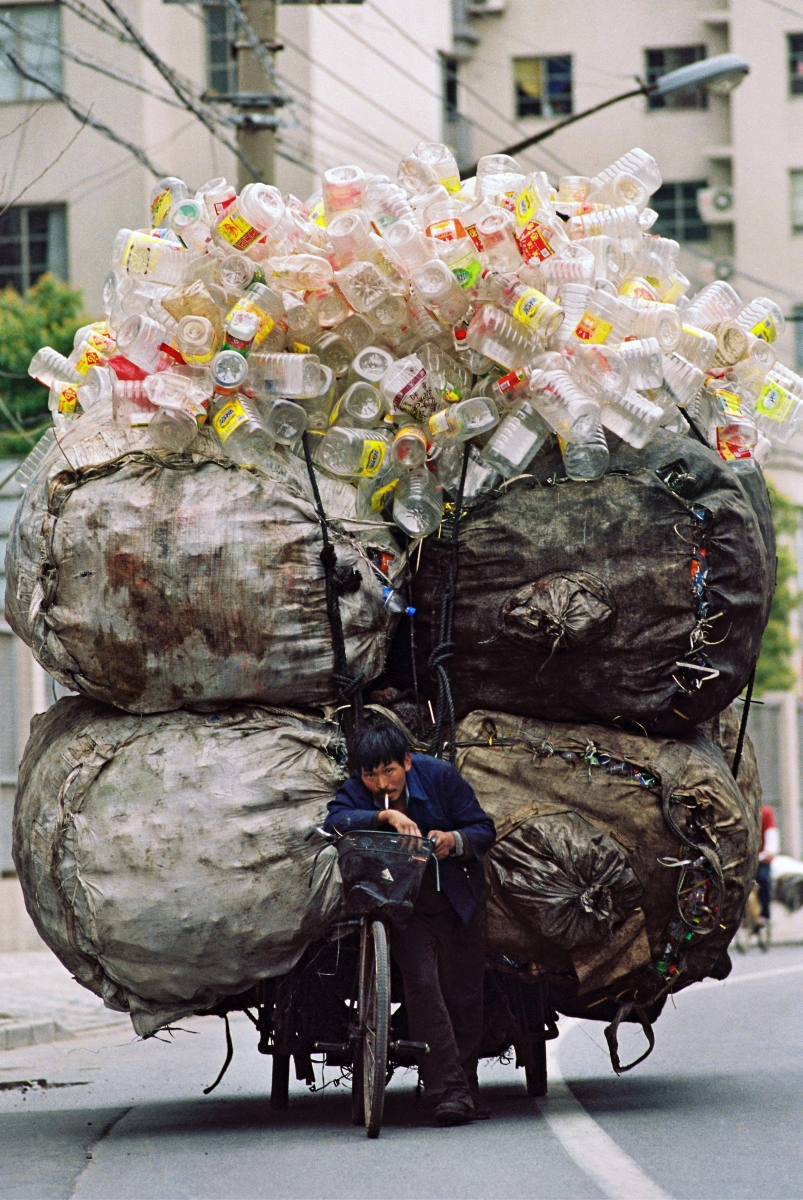 This man loaded plastic bottles from 3 different locations and transported them to the final collecting station. He could make three rounds per day and earned about 30 yuan per round. That was considered not bad an income. Except that he had not been well liked by the traffic officers for taking up the full slow lane. Now-a -days such a job opportunity is no longer available.

Author: The Photography of Gangfeng Wang
Gangfeng Wang is a self-taught freelance photographer who ws born is Shanghai in 1956 and grew up during the Cultural Revolution,the "decade of austerity"from 1967-77. After graduation from high school in 1975, he was sent to work in an orchard on a government-run farm in the countryside. In 1977, he was re-trained to play the violin in a revolutionary orchestra,whose sole purpose was to inspire the 30,000 people who worked at the Leap Forward commune where he loved. In 1980,his life took another turn when he was sent back to Shanghai, assigned to work as a machine repairman in Shanghai Rope and Net Factory. When his sister gave him his first camera as a gift in 1981, he became enchanted with taking pictures and obsessed with the thought of one day becoming a professional photographer.
With little money for photographic equipment and very little time,Wang taught himself the basics of photography and planned for a different future. In 1985,he took a lot of absence from the factory (claiming about of "high blood pressure")to concentrate exclusively on photography.He was among the first in Shanghai to make his living as a freelance photographer, doing PR work for joint-ventrue hotels and contributing photographs to the China Guide Book In Hong Kong. His work was noticed in a hotel gift shop in 1986 by a Candian visitor to Shanghai, who arranged for an exhibition of his work in Montreal. A citizen of Canada since1989,his works have been exhibited throughout North America, Eighteen of his prints hang in the permanent collection of the Musee de l'Elysee in Lausanne,Swizerland, one of the great photographic museums in the wrold.