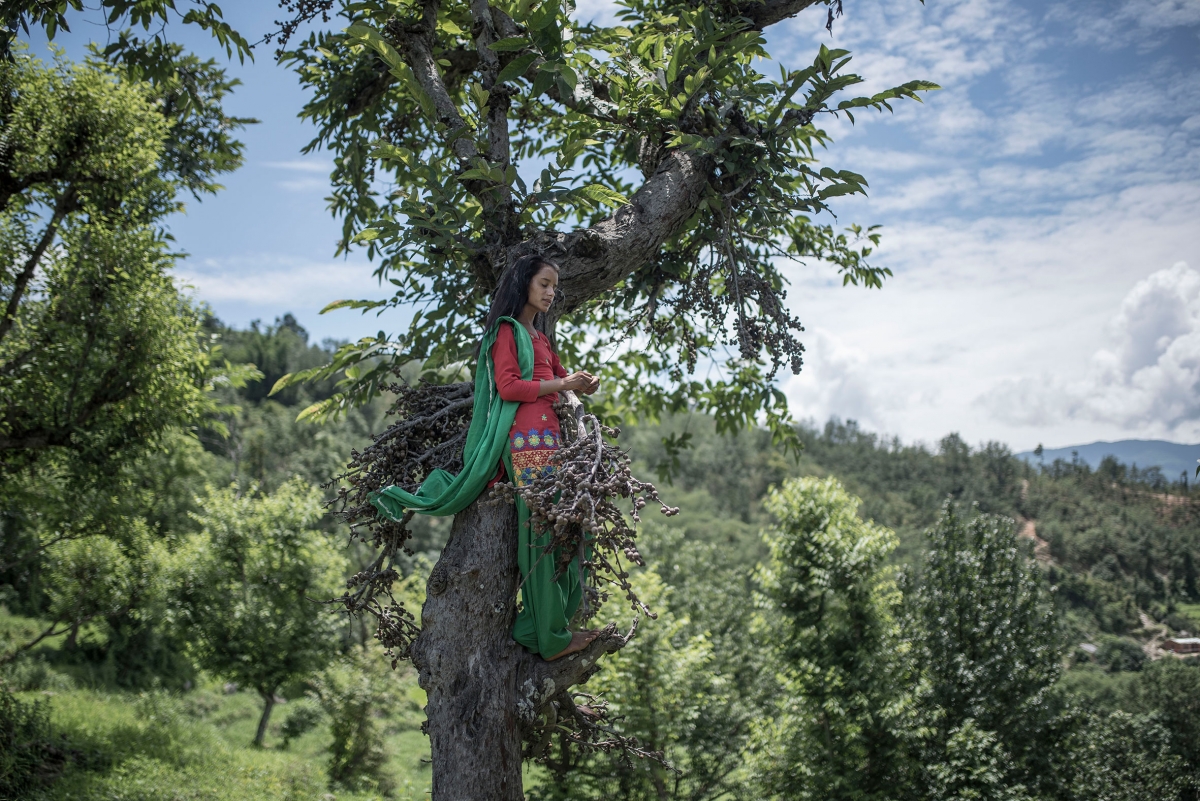 Surekha, a 14-year-old girl from Far Western Nepal, has perched upon a tree to eat some fruits. In some areas of the country, menstruating women are isolated once a month, and some are not allowed to touch trees like the Peepal tree (a tree that represents the God Vishnu) and fruits. Surekha had her first period two months ago and will be facing this restriction all her life once a month.

Author: Maria Contreras Coll (1991) is a documentary photographer from Barcelona.

Maria became interested in photography at the age of 14 with her first digital camera. She decided to study a Bachelor Degree of Fine Arts in Photography at the University of Barcelona (2010-2014). During those years, she investigated about the concept of happiness, unrealised dreams and the hopes of people immersed in the rush of urban life. Her documentary projects such as “Ah!”, was exhibited at the Català Roca Golferichs center in 2013, and “Persona”, was exhibited at the University of Barcelona in 2014.

After finishing her degree, she did a one-year Workshop in Documentary Photography at PatiLlimona (2015) with the photographer Eva Parey. In 2015-2016 she studied a Postgraduate degree in Photojournalism (2015-2016) at the Autonomous University of Barcelona. She spent the next year photographing the most intimate and personal aspects of the Refugee Crisis in Europe, traveling to affected areas such as Greece, France, Germany or Morocco. After that, she moved to Nepal to work on a women's rights project.

Since then, her stories has been published in Aljazeera, Le Figaro, Le Figaro Magazine, El Pais, El Mundo, Internazionale and Vice. She has been a guest speaker at the Autonomous University of Barcelona and her work has been exhibit in “Looking For Refuge” organised by the Spanish Commission for Refugee Assistance in Madrid (2017) and the “Renaissance Photography Grant” in Getty Images Gallery in London (2017) among others. Recently she's been selected for the Women Photograph Mentorship 2017-2018 and won the Spanish Grant Click 2017 to continue with her work in Nepal.