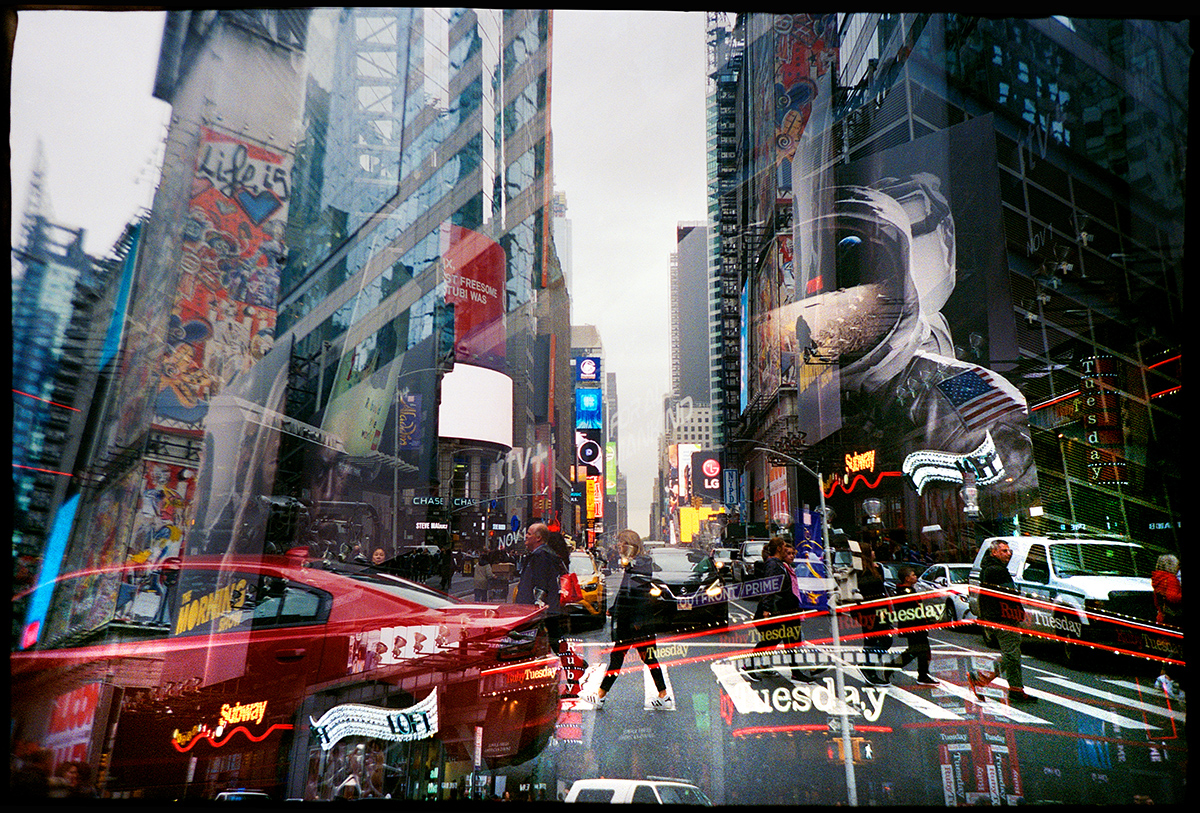 New Yorkers and Their Environments is in a way a small part or my four-year Eclectic series of double exposure photographs where each city around the world has its own distinctive pace of elements, circumstances, colours; an array of miscellanea that shape what we call memory; a human quality as ephemeral as ever–changing.

In New Yorkers and Their Environments I focused on different streets and areas of New York that capture the surroundings and locations where New Yorkers may cross on their way to work as landmarks. It reveals the true essence of the daily life of New Yorkers in one of the most if not the most cosmopolitan and challenging city in the world. All pictures were taken with a 35mm film camera applying the double exposure technique, using 800ISO colour film, on my way around the city trying to capture the mood and the energy that this incredible metropolis offers.

When I am shooting in double exposure with my 35mm film camera, in a way and style, I am trying to capture the true essence of a city or an area. What I want to convey is my perspective of “what you see is what you get” by capturing those unique moments when I catch an image. The double exposure allows me to capture all that but can take my images to a different level where I can be more creative by holding double–layered scenarios that will give the viewer a magical, almost surreal, perspective and sense of unnatural futurism.

Author: Alexandro Pelaez is a Multi-award winning Latin American fine art film photographer based in London who initially started his professional career in Advertising in USA. Having moved to London in 2001, Alexandro completed his second BA (Hons) at Central Saint Martins, University of the Arts London. Since then, Alexandro has worked over the years on various photography projects with different clients in the UK, Latvia, Germany, Italy, France, Hong Kong, Shanghai, Mexico and USA.

His last two Solo Exhibitions were “LONDONERS AND THEIR ENVIRONMENTS” (2018) at the Herrick Gallery (London, UK) and “ECLECTIC” (2019) at Bermondsey Project Space (London, UK).

Alexandro latest exhibition was at Spectrum Miami during MIAMI ART BASEL WEEK in December 2019 at the Mana Wynwood Convention Center, where he exhibited his latest project of Street Photography: ECLECTIC, a series of double exposure photographs taken with his 35mm film camera.